On February 10, 2012, a Minnesota court denied summary  judgment, and refused to dismiss claims of malpractice against LASIK surgeon,  Mark Lobanoff, M.D.  Linegar v. Lobanoff, Civ. Action No. 10-4956 (D. Minn).  In that case, the complaint alleged that the  doctor committed malpractice when he performed three surgeries in eleven months,  for a total treatment of 8.45 diopters, resulting in her need for a cornea  transplant.

The patient also claimed that the doctor breached  informed consent when he switched from LASIK to PRK surgery, and allegedly  discussed the change in surgical plan, only after he administered 15 mg of  valium; and, the doctor violated the Minnesota Consumer Protection Act when he  claimed to be the “preferred LASIK surgeon to the Minnesota Vikings.”

Defendants contend that Linegar orally consented to the PRK,
but there is no evidence of that in the record.
Dr. Lobanoff testified only that his usual procedure was to discuss the
risks with the patient; he also stated, however, that he had never had a
situation in which a patient refused to open her eyes enough for LASIK, thus
necessitating the operating-room switch to PRK.
Moreover, there is no dispute that Linegar had been mildly sedated so
that any consent she gave would be suspect.
Dr. Lobanoff acknowledged as much by having his staff get a consent for
the PRK from Linegar’s husband in the waiting room.

The court dismissed the consumer fraud claim finding  that the patient did not rely on the false advertising.  The court was persuaded that the patient had  her first two surgeries before the doctor began his deceptive advertising  claim. However, the court disregarded the patient’s testimony that she ceased  treating with the doctor, treated with another practice group, demanded a  refund, and only returned to Dr. Lobanoff after she saw his billboard: 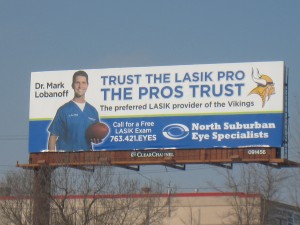 Dr. Lobanoff admitted that he  treated no current Vikings players, while the Vikings’ trainer stated that six of  his players received treatment from another “preferred” LASIK provider.

In a related  motion, defendants’ counsel sought to discharge and replace defense expert  George Waring, M.D., as “incompetent,” as a result of “issues with his memory.”  Plaintiff opposed  the motion, noting that Dr. Waring continues to treat patients, and no medical  affidavit was offered to support Dr. Lobanoff’s claim that his own expert was  incompetent.  Instead, plaintiff argued  that defendants sought to fire Dr. Waring because of his unsuitable history as  an expert, including his consensual settlement in a hyperopic ectasia  malpractice lawsuit filed against him; suspension of privileges from Emory  University Eye Center for implanting a surgical device without the patient’s  consent; and a criminal conviction for assaulting a flight attendant.

In addition, the court  also rejected plaintiff’s argument that as a subsequent treating doctor, it was  impermissible for Neal Sher, M.D., to testify as an expert against his former  patient.  Plaintiff argued that it was a  breach of fiduciary duty, and violation of professional ethics, for a doctor to  become a paid expert/advocate against a former patient.  As a result, patients need not only fear  injury by surgeons, but should be prepared for subsequent treating doctors to  testify not only as to facts, but as to expert opinions, that impair patients’  ability to seek compensation for malpractice.

As a final point, the  court granted plaintiff’s counsels’ motion to withdraw as her attorney.

If you or a loved one  has been injured by a doctor, you should promptly contact an attorney with  experience in medical malpractice. The  Law Office of Todd J. Krouner has a proven track record of helping patients  injured by LASIK (and other forms of medical malpractice) all over the country.  To determine if you have a strong case,  contact us for a free consultation at (914) 238-5800.